Fidelity today announced the Simplicity RMD Funds. These managed-payout funds, which generally aim to provide investors with regular monthly payments (which aren’t guaranteed like annuity payments) have been around for ten years. Managed-payout funds in total represent less than 1% of the available target-date mutual funds available on the market. “Retirees often struggle to understand when, which assets, what amount and how to take the annually mandated withdrawal from their tax-deferred retirement accounts,” said Ken Hevert, senior vice president of Retirement at Fidelity Investments. “If not done correctly, investors may experience a 50% tax penalty on any amount not withdrawn by the annual deadline.”

These RMD payout funds are at the core a target date mutual funds which have a specific accumulation year in the future to better gage your investment risk. An example would be a later dated target date funds, such as the Fidelity Freedom 2020 fund. This funds has 60% percent equity and 40% fixed bonds investment exposure in the fund. It is built for accumulation of assets with a built in asset allocation model.

The spin on Fidelity’s new RMD Simplicity payout funds are the same as a target dated fund except it has a built in RMD distribution linked to it with another fidelity withdrawal form required. You would still receive a notification from any other IRA investment that a RMD distribution is required if you are older than age 70 1/2 yrs old. So the RMD marketing spin is just that a way to capture assets at Fidelity from IRA holders. Look into a QLAC (Qualifying Longevity Annuity Contract) which the US Treasury has “blessed” as a way to totally defer RMD income payments until age 85 of 25% of your IRA balance or $125,000, whichever is the lesser of.

QLAC income is greater than the income from an investment, such as Simplicity RMD Funds from Fidelity, gaining 5% each year for 25 straight years. The below chart illustrates taking IRA portfolio RMD vs investing that $125,000 IRA into a QLAC and receiving guaranteed lifetime income payments at either 75, 80 or 85 yrs old. At age 90 you would have received $125,031 more income via a QLAC at age 80 than taking the RMD from a portfolio investment. See below for details: 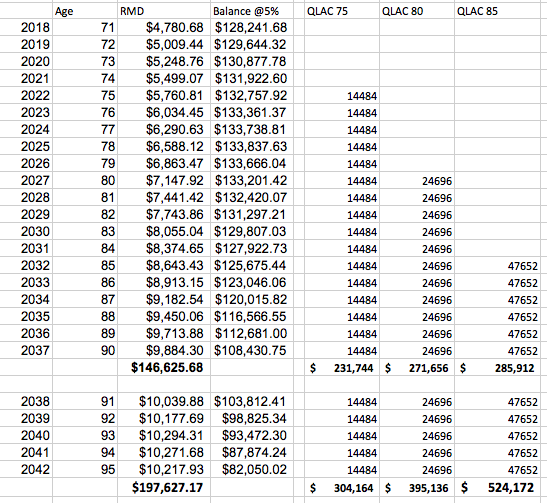